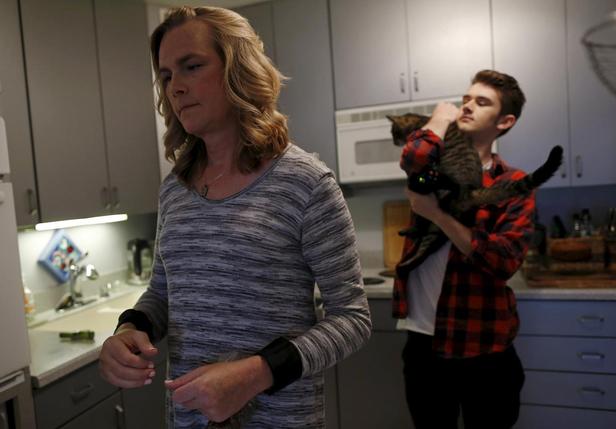 Carly Lehwald, transitioning to life as a woman, is at ease shopping for lacy bras in new reality television show “Becoming Us,” while Ben Lehwald, her teenage son, tags along, squirming in embarrassment.

Carly tells Ben coolly: “Been there, done that, not a big deal.”

It may be hard for Ben, but the whole idea of bringing cameras into their homes belongs to this high school senior who felt “lost” when his father switched from “Charlie” to “Carly.”

He pitched the show to his family in hopes that putting their lives on TV would help other kids accept transgender parents.

The ABC Family “docuseries” premieres June 8, marking one of the first reality TV shows to broach transgender acceptance to a mainstream U.S. audience.

As it did in the late 1990s in gay-friendly shows such as “Will & Grace,” U.S. television is again playing a big part in the transgender community’s growing visibility, with scripted dramas such as “Orange is the New Black” and “Transparent” leading the way.

Ben Lehwald believes, however, that it’s time to show the real-life drama unfolding in the Chicago suburb of Evanston.

“It doesn’t just happen to people on TV,” the 17-year-old told Reuters. “Sooner or later, we’re just going to have to start accepting that.”

“Becoming Us” precedes the E! Entertainment documentary, due in late July, of Olympic gold medalist Bruce Jenner’s transition to life as a woman.

Jenner is photographed for the first time as a woman, Caitlyn Jenner, on the cover of the July edition of Vanity Fair magazine.

The TLC cable network is premiering a series about a transgender 14-year-old called “I am Jazz” on July 15, and in April this year, Discovery Life aired “New Girls on the Block” about a group of transgender friends in Kansas City.

While support for transgender rights might be snowballing in Hollywood, ABC Family, owned by Walt Disney Co, hopes “Becoming Us” will enhance wider public awareness, while also entertaining audiences.TV “has to put a mirror up to who we are as a society and say: ‘Can’t we be accepting of these people and can’t we make their lives easier?'” said producer George Moll.

“Becoming Us” chronicles the family’s challenges through Ben’s eyes – a similar set-up as “Transparent,” the Amazon Prime drama that won two Golden Globes for its depiction of adult children struggling with their father’s new female identity.

“It’s a really touchy thing for kids,” said Ben, who still thinks to himself: “Oh my God, my father is a woman.”

He finds reassurance from his friend Danielle, whose father began transitioning to life as a woman years before. Ben’s step-sister and his mother, who has separated from Carly, are also prominently featured.

For Carly Lehwald, 49, the opportunity to present a transgender lifestyle from a non-celebrity perspective convinced her to open up on the show. The camera follows as she tells Ben about opting for sex reassignment surgery and reads her “transition statement” at the dinner table.”I’m not a Laverne Cox,” she said, referring to the transgender actor acclaimed for playing a transgender inmate on “Orange is the New Black.” “I’m just an everyday person with the life that I’m living.”

Moll said “normalizing” a transgender character appealed to ABC Family, which already explores the diversity of American families with dramas such as “The Fosters,” about a mixed-race lesbian couple with several kids.While praising the show’s intent, transgender activists are challenging networks to go further, noting that current programs largely focus on straight white men who are becoming women. They are also pushing for television to look at issues such as bullying, suicide and homelessness that confront transgender people.

“It’s a much bigger problem than just how we are transitioning,” said Gina Bigham of the Los Angeles LGBT Center.