Originally published on Ampersand LA, produced at the USC Annenberg School of Journalism.

In the eye of the beholder: LACMA’s “Islamic Art Now” highlights images of female vitality & empowerment 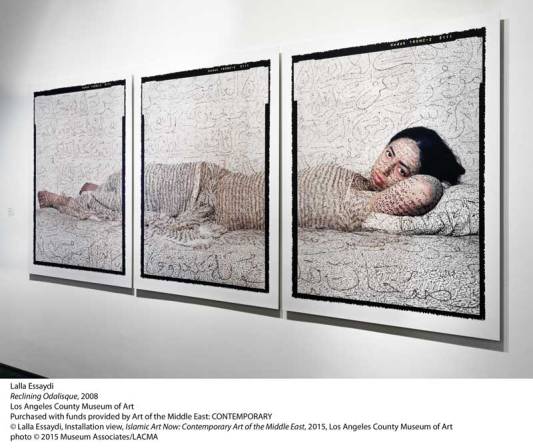 How does the world view Middle Eastern women, and how do they wish to be seen? While newspapers and televisions often exhibit photographs plucked from incidents of violence and chaos, artists are using images to express personal stories of empowerment and vitality. Such pieces are now on view at the Los Angeles County Museum of Art in an exhibition called “Islamic Art Now.” The museum is home to one of the world’s largest Islamic art collections, featuring 1,700 pieces that date to the first century. But this is the first time it has put just its contemporary works on display. As Daina Beth Solomon toured the exhibition with curator Linda Komaroff, she discovered an entire gallery dedicated to images of women who break from Western stereotypes.

One of the artists, Moroccan photographer Hassan Hajjaj, will premiere a film tied to the exhibition on May 13 at 6:30 p.m. Called “Karima: A Day in the Life of a Henna Girl,” the feature-length work follows Karima, a henna artist, through the course of a day in Marrakech. Tickets are sold out, but a standby line will form at 5:30 p.m. Hajjaj and film participants, including Karima, will take part in a Q & A following the screening.