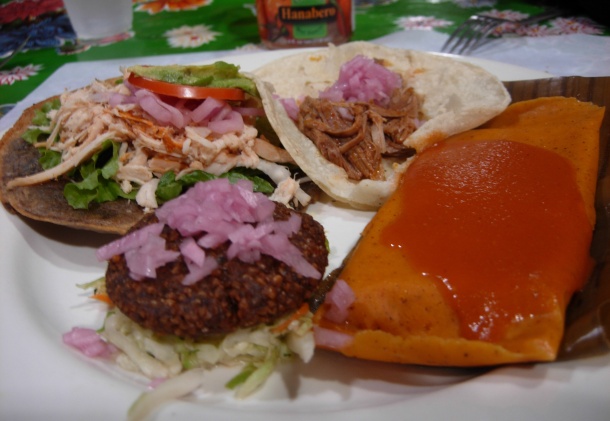 Looking for an introduction to Yucatecan cuisine? Try a panucho. Panuchos begin as traditional corn tortillas, but then are grilled to form crispy exteriors that shelter tender black beans that have been nudged inside. They are topped with shredded turkey, pickled onions, and avocado. The dish is a staple at Chichen Itza — not the monumental Mayan pyramids of Mexico, but a quick-serve restaurant tucked inside Mercado la Paloma in South L.A. near USC.

Chef-owner Gilberto Cetina says his 12-year-old eatery is the only restaurant in L.A. with a dedicated Yucatecan menu. That’s a big deal, as Yucatecan cuisine is notably distinct from other Mexican styles. While most Mexican food blends indigenous and Spanish influences, the Yucatecan style blends mixes Mayan concepts with a diversity of culinary traditions. After all, the Yucatan has welcomed immigrants from Spain, the Netherlands, France, Lebanon, and the Caribbean for centuries, says Centina. 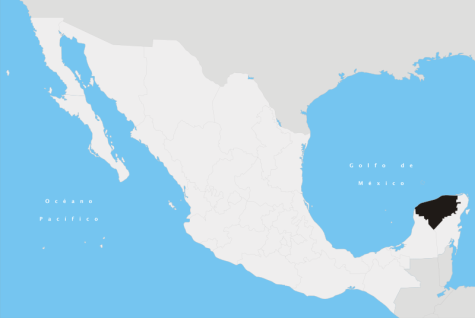 Located in southern Mexico right off the Gulf Coast, the Yucatan is an obvious entry point to Mexico for immigrants. / Wikipedia

Does this mix sound too wild to be true? Not at all. One of my companions at a recent Chichen Itza lunch has Mexican, Cuban, and Lebanese roots. Where did many of his family members end up? The Yucatan.

We were dining at Chichen Itza last November as part of a USC Spanish class on “The Culture of Food in Hispanic L.A.,” taught by professor Sarah Portnoy. Cetina explained the food on our plates, pointing out the unique qualities — a chicken tamale with spongy masa, a Lebanese meat patty called “kibi,” the classic Mayan cochinita pibil, and of course, a panucho.

His son, also named Gilberto, then demonstrated the art of panucho-making. His father once told the L.A. Weekly’s Amy Scattergood, “the panucho is a lot of work — it’s very intensive labor. And no one in the kitchen wants to do it.” Yet the tradition continues — for a delicious result.

Watch the video to see how it’s done (in Spanish), and to hear the panucho’s surprising origin story (in English).

For more recipes (in English!), check out Cetina’s recent cookbook, “Sabores Yucatecos.” My colleague — and Mexican food expert — Barbara Hansen reviewed it for the L.A. Weekly, commending the work as “more extensive than anything I came across in a recent tour of the Yucatán peninsula.”