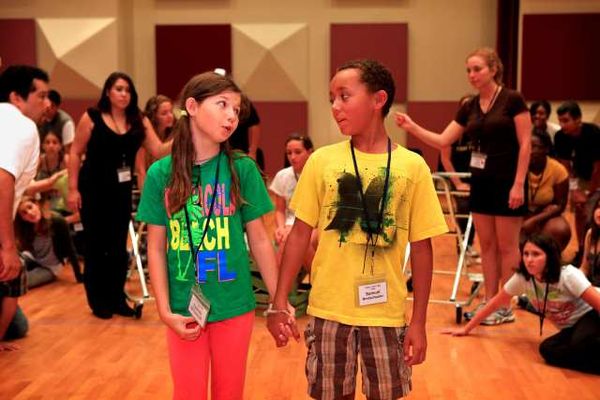 This month at Opera Camp, a program of L.A. Opera, children from 9 to 17 will sing, dance and make new friends. They will also learn about a vastly different camp — the Nazi concentration camp at Terezin, Czechoslovakia, that interned 15,000 children from 1941-45.

During those years, the opera “Brundibar” was performed 55 times by many of the young people — before most were transported to their deaths. Only 100, according to most estimates, survived.

Now, 50 Opera Camp participants are preparing to perform the 35-minute work four times this weekend at the Barnsdall Gallery Theatre.

Campers learned the history of “Brundibar” on the first day of the two-week camp, which is back after a two-year hiatus due to funding issues.

“A Czech Jew named Hans Krasa wrote the opera that was smuggled into the camp Terezin, also known as Theresienstadt,” said Samuel Bindschadler, 12, of Venice, an avid opera fan. “The Nazis made it look like a nice place. They painted the place and planted flowers.”

In reality, Terezin was a “transit camp” for Jews, dissidents and others thought to be “undesirable” — a holding area en route to Auschwitz and other death camps. In accommodating musicians and artists, Terezin was intended to create the impression that the internees were well-treated. There the Nazis allowed the camp’s children to stage 55 performances of “Brundibar,” especially for visitors such as the Red Cross.

The opera tells the story of young siblings Annette and Joe, who must sing for tips in order to buy milk for their ailing mother. Brundibar, a greedy organ grinder, tries to drive them out, but the children and their friends, including a dog, cat and sparrow, triumph over him.

Holocaust survivor Ela Weissberger, 81, who sang the role of the cat in each performance at Terezin, will attend all Opera Camp shows and sing the finale’s “victory anthem” with campers. She regularly travels from her upstate New York home to attend “Brundibar” performances and share her story.

James Conlon, L.A. Opera’s music director, will conduct a five-piece orchestra at each performance. The presentation of “Brundibar” corresponds with his Recovered Voices project, which brings to light the compositions of artists who had been silenced during the Holocaust.

” ‘Brundibar’ is no less musically and artistically significant for being a ‘children’s opera,’ ” Conlon said in a statement. “Its historical importance as a courageous act of defiance is indisputable.”

To prepare students, the camp offers educational workshops and lectures, plus a trip to the Museum of Tolerance. Although the opera’s history is emphasized, development of musical and performance skills is paramount, said Stacy Brightman, L.A. Opera director of education and community programs. In addition to vocal coaching, classes cover choreography, acting, staging and opera set design.

The program is designed to accommodate students from a variety of backgrounds, including those without musical training or opera experience, according to Brightman.

Alexandria Jackson, a 16-year-old from San Pedro, is looking forward to jump-starting an opera career. The longtime R&B fan and songwriter got hooked a couple of years ago when she saw “The Barber of Seville” at L.A. Opera, and now wants to educate friends that opera isn’t “just Italian screeching.”

Julio DeHaro recently performed in “The White Bird of Poston,” about the Japanese American internment experience, as part of an L.A. Opera educational program at his South Gate high school. The 17-year-old drummer plans to continue studying classical music at college. At Opera Camp, he most looks forward to “building up my vocal abilities.”

For 11-year-old Julia Timmons from Beverly Hills, Opera Camp is about camaraderie as well as music. “It’s easy to make friends when you all have the same passion,” she said.

Many campers expressed pride at contributing to an effort to revive Holocaust-era music. “I feel honored to bring these lost operas back to life so more people can hear them,” said Golda Berkman, 12, of Beverly Hills. “And they are really beautiful melodies.”

For The Record
Los Angeles Times Monday, August 15, 2011 Home Edition Main News Part A Page 4 News Desk 1 inches; 63 words Type of Material: Correction
Opera Camp: The caption for a front-page photo accompanying a story about L.A. Opera’s Opera Camp in the Aug. 13 Calendar section said that the opera “Brundibar” debuted at a Nazi concentration camp. It debuted at an orphanage in Prague in 1942. The caption with two other Opera Camp photos inside the section misspelled the name of director Eli Villanueva as El Villanova.