Originally published in the LA Times along with a photo slideshow by Kirk McKoy. 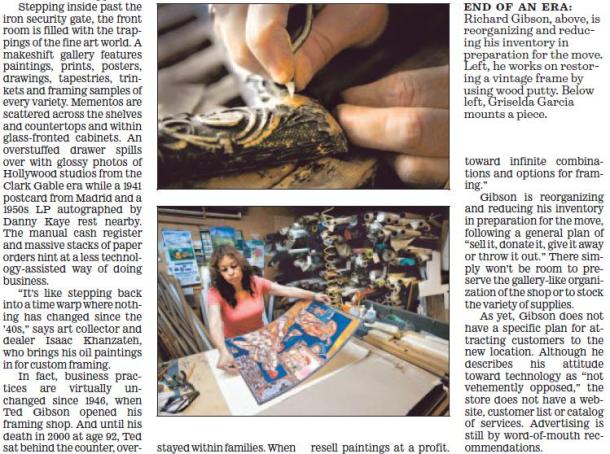 Framework for a new chapter in store’s existence

Ted Gibson’s framing and art store is moving from its original 1946 site on 7th Street to Koreatown.

By Daina Beth Solomon, Special to the Los Angeles Times

The stretch of 7th Street just west of Hoover is a no-man’s land between Koreatown, MacArthur Park and Pico-Union. In the shadow of the copper-sheathed Bullocks Wilshire tower is a rust-colored stucco structure, distinguished by patches of graffiti cover-up paint and exposed earthquake anchor bolts. The decaying vacant lot next door is overgrown with thick weeds. An unassuming sign in front reads, “Ted Gibson, Inc. Picture Frames and Art Supplies.”

Stepping inside past the iron security gate, the front room is filled with the trappings of the fine art world. A makeshift gallery features paintings, prints, posters, drawings, tapestries, trinkets and framing samples of every variety. Mementos are scattered across the shelves and countertops and within glass-fronted cabinets. An over-stuffed drawer spills over with glossy photos of Hollywood studios from the Clark Gable era while a 1941 postcard from Madrid and a 1950s LP autographed by Danny Kaye rest nearby. The manual cash register and massive stacks of paper orders hint at a less technology-assisted way of doing business.

“It’s like stepping back into a time warp where nothing has changed since the ’40s,” says art collector and dealer Isaac Khanzateh, who brings his oil paintings in for custom framing.

In fact, business practices are virtually unchanged since 1946, when Ted Gibson opened his framing shop. And until his death in 2000 at age 92, Ted sat behind the counter, overseeing custom framing and customer service. Now Richard Gibson, Ted’s son and the current owner, carries on his father’s tradition of craftsmanship and service.

Although Ted Gibson, Inc. has held a steady course, the economic climate has not. Gibson says that the store is not profitable and the building requires up to a million dollars in renovations. In response, Gibson sold it in July and is leasing a more compact retail location a few miles west in Koreatown, where neighbors include an acupuncturist and a discount clothing store. The new space is 2,000 square feet — 7,300 square feet smaller than the original store. The move is planned for early September.

Yet, this is more than the story of another struggling independent business. Certainly, there are other locations for quality custom framing in the city. But Ted Gibson’s is one of the few remaining reminders of a time when hand-crafted items were prized and businesses stayed within families. When the 7th Street location closes its doors, the living snapshot of post- World War II Los Angeles will be lost.

On a recent morning, Gibson discusses framing options with a customer as they examine a detailed painting. “The idea of framing is to complete the image,” he says. “You must not introduce anything more or less than what’s required.” Gibson bestows personal attention on each order, often leading customers to the workshop rooms to hunt for the perfect frame.

Over the years, museums, galleries, decorators and collectors have sought framing services from the store, according to Gibson. Customers return year after year, many for decades. Some are the children and grandchildren of original patrons.

“Art connoisseurs would rather have unique frames made for their paintings instead of buying them off the shelf,” Khanzateh says. Ted Gibson’s “brings value to the art” so that Khanzateh can resell paintings at a profit. He appreciates the “museum quality work” and the comprehensive services that include restoration as well as custom framing.

The art of framing is in the family for Gibson’s two long-time employees. Griselda Garcia does restorations and “fittings,” putting the frame pieces together and attaching mattes and backing layers. An employee since 1990, she learned the craft from her father, a 20-year store veteran. Antonio Oyarzabal was only 14 when he began with Ted Gibson in 1975. He follows his father’s path as the craftsman responsible for cutting and fitting frame moldings.

The work requires a multitude of supplies filling the 9,300-square-foot space from floor to ceiling. The workshop’s 620 shelves, each 12 to 16 feet long, hold 2,000 wooden moldings, including some exotics like wormwood and chestnut. Hundreds of fabrics are rolled into tall stalks. Gibson says that the sheer number and variety of materials allow for “heading toward infinite combinations and options for framing.”

Gibson is reorganizing and reducing his inventory in preparation for the move, following a general plan of “sell it, donate it, give it away or throw it out.” There simply won’t be room to preserve the gallery-like organization of the shop or to stock the variety of supplies.

As yet, Gibson does not have a specific plan for attracting customers to the new location. Although he describes his attitude toward technology as “not vehemently opposed,” the store does not have a website, customer list or catalog of services. Advertising is still by word-of-mouth recommendations.

Most days, the store welcomes a steady stream of phone calls and customers, lingering to discuss framing options, waiting for an order or simply chatting with Gibson. Lately, much conversation has been about the store’s relocation.

Laura Green visited the store with her parents when she was younger and to her, it has not changed. “Richard has carried on his father’s tradition of good taste and friendliness,” Green says.

Bill Stutz, an oil painter and 25-year-customer, is concerned that “a lot of history will be lost in the new location.”

“The staff is caring and do museum-quality work. It would be a shame to go somewhere else,” Khantazeh says.

Gibson is determined to give the store’s new location his best shot, continuing to offer the same services and the store’s decades-old aesthetic. “We’ll take the show on the road,” he says.